Facebook recently began testing of a split newsfeed for users in six countries. The newsfeeds would consist of friend’s posts and sponsored content in one feed, and all non-promoted posts from agencies, organisations, businesses and news outlets, in another.

This will result in a ‘pay to play’ battlefield on Facebook, with only those companies who pay for promoted posts reaching their audience’s standard newsfeed.

The divided content is being tests in Slovakia, Sri Lanka, Serbia, Bolivia, Guatemala, and Cambodia, and will continue for several months.

Adam Mosseri, Head of News Feed at Facebook, published a blog post stating that the testing aimed to understand if people preferred to have separate places for personal and public content.

Split newsfeed may also allow people to discover relevant content from pages they hadn’t yet connected with, the statement continued.

However, writers from the Independent believe Facebook has more commercial motivations.

Facebook has experienced a “content collapse,” where users post less and less personal information on the social media platform. One motivation for this split testing could be to encourage people to read and post about people’s personal lives, to gather more data used for advertisement purposes.

A second motivation could be to encourage organizations, groups, and businesses – including news companies – to purchase Facebook ads to generate more revenue for the tech giant.

Companies in the countries subjected to the tests have complained of a drop in user engagement with Facebook pages and a decrease in organic reach, as shown in the chart below. 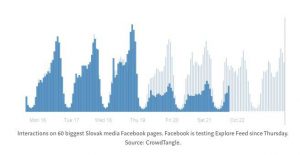 Companies in countries outside the testing areas don’t need to worry, the Facebook spokesperson stated, as there are currently no plans to roll the test out further.

Explore, a complementary feed of popular articles, videos and photos customized for each person, serves a similar purpose the split newsfeed does in other countries.

Explore has been available on mobile for some months, and has recently been optimised for desktop.

While unsponsored posts will continue to be shown in a user’s newsfeed as usual, the Explore page seeks to increase user engagement and time on the site by presenting them with posts tailored to their preferences and history.